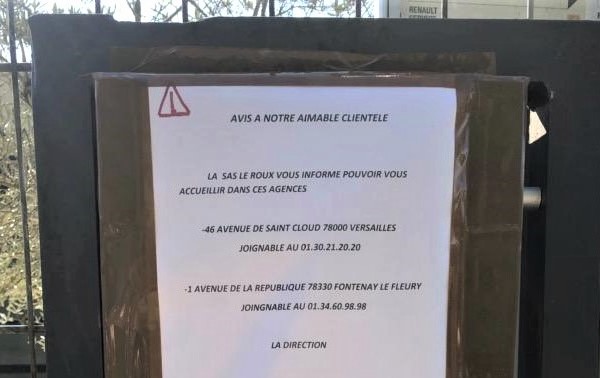 Didier moved to the town of Les Loges en Josas (Paris Region) around the year 2000, buying a garage that has existed since 1970 or even since the end of the Second World War. For twenty years, within the car maker Renault group, Le Roux, a fan of motor sports, has developed its sales, rental, repair and technical inspection activities for motor vehicles. Through competition, he learned the different jobs of this industry and he got his start. Today, Didier is at the head of an SME employing several dozen employees and, as a resident of Jouy-en-Josas (at the edge of Les Loges en Josas), is part of the human and urban landscape of these two municipalities .

Today, this entrepreneur manages to get through the crisis thanks, on the one hand, to an organization that is both structured and flexible, as well as to funds that he has been able to put in reserve for the purpose of future investments or stages to a possible crisis. This is what is called a wise man, rather ant than cicada.

With the pandemic [1]As a reminder, a pandemic is the spread of a contagious disease on several continents. It is part of natural disasters., Didier had to fight to find plexiglass protections, in order to prevent the risks of transmission between customers and employees. The traditional suppliers were blocked. He had to find new ways to adapt his business to this context of crisis: he called his entire network of convenience stores and emergency physicians.

Le Roux, for the past ten days, has resumed its activity, essential for the local economy: without vehicle maintenance, many people who absolutely have to travel for their work would get stuck, starting with the delivery drivers. This partial reopening made it possible to keep some of the staff at work. Employees can thus continue to exercise their acquired skills and stay in the dynamics of their sector, which has been hit hard.

But Didier is confronted with the contradictions of the government, in the health, fiscal or social fields.

The company manager is responsible for the safety of his employees during their working time, which Didier does the best he can especially since most of his employees have worked for him for more than five years. But protective equipment is cruelly needed. Leroux, thanks to its network in the medical field, was able to obtain some masks. Financial aid? Didier is still waiting: to date, no news, especially regarding partial unemployment. Before the crisis, when the employees had received a bonus for Christmas, one of them had exclaimed: it is the Macron bonus! No, this is the Le Roux bonus! had corrected the business manager [2]A small clarification is necessary: ​​when a public official grants aid, it is only a question of taxpayers’ money or debt. Thus one should exclaim: It is taxpayers’ premium! Conversely, when a manager / owner of a private company grants a bonus to his employees, it is with his own professional capital..

In conclusion, Didier Le Roux admits that he sometimes feels alone in the world. This Corona crisis has the advantage of showing, once again, the structural shortcomings of the organization of France vis-à-vis French small and medium-sized enterprises (SMEs). Let us not forget that the latter, in 2017, generated 199 billion euros of added value and employed 2.8 million people[3]GRAIGNON Maïté, LEMAIRE Franck, THIEBOT-GOGET Karelle, Bulletin de la Banque de France – La croissance de l’activité des PME françaises se consolide en 2017 (Bulletin of the Banque de France – The growth of the activity of French SMEs is consolidated in 2017), 218-4th July/August 2018. [Consulted on 23rd April 2020]. Available at: https://publications.banque-france.fr/sites/default/files/medias/documents/bdf218-4.pdf.

Contrib’City takes this opportunity to pay tribute to all the creators and / or heads of SMEs who manage, with private funds, in an absolutely amazing balancing exercice, to produce goods and / or services, to hire assets, to finance part of the public budget and, last but not least, to create true social ties at the local or regional levels when it is not at European or worldwide ones.

After having explored, at least at a shallow depth, the more or less brackish waters of politics in the Yvelines (west of the Ile-de-France region), I propose to gain altitude and breath a different air. Let’s move from the local level to that of our continent, Europe, to see how Europe has influenced our daily lives, and continues to do so. By traveling quickly through time, from the France of Louis XIV, which enjoyed the status of the first demographic power of the old continent in the XVIIth and XVIIIth centuries, to the European Union of today, we will see how French centralization of the past could begin to retreat and give way to a better distribution of the territorial tensions on France. We have to go through this territorial balancing, proposed (consciously or not) by the EU, for a more harmonious development both from an economic, social and environmental point of view.

In the following articles, as promised despite very rich news (which will perhaps lead us to make a few trips back and forth to the Ile-de-France region), we will discuss about the territorial margins of France, I mean the islands, and we will travel, for example, to Hoedic, Houat and Belle-Ile. These isolated lands, even when they are only about ten nautical miles from the mainland, are surrounded by a natural element (the sea) considered hostile by both geographers and sailors. But they are strategically important in the development of the maritime domain of France or otherwise called the Exclusive Economic Zone (200 nautical miles from the shore): the second largest in the world (11 million km²) just after that of the USA (11.4 million km²). These islands can also serve as witnesses to our will and ability to decentralize our country. If we are able to develop our near or far islands, then we will show that we can truly create, finally, a balanced partnership between the different French poles not only in the overseas territories but also within the hexagon.

Your comments are, as always, welcome and, in case you also wish to write an article or share your testimonial, please do not hesitate to contact the site.

I wish you a safe journey through time and space.

In the booklet “Le mot du Maire” (“Mayor’s Word”) posted on the 20th November 2020, the opposition returns to one

Between the American elections and the Chinese expansion, what about European Union? (1/2)