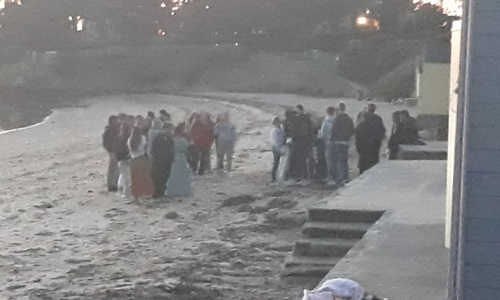 Yesterday, going to a place of prayer, where people generally have the reputation of being rather reasonable, I suddenly saw the building fill up like the Gulf of Morbihan during a high-coefficient rising tide! Even if I had my place previously booked, as required by the health protocol decreed by the national authorities. Alas, in front of the tidal wave, I had to retreat by explaining that I, too, believed in eternal life but that I still had two or three duties (and incidentally one or two files) to complete in this world.

The same evening, having forgotten a navy jumpsuit, I left for the Grand-Plage of Ile-aux-Moines, and I saw, in the middle of the expanse of sand, a few dozen young people closely gathered, talking and dancing. A few days earlier, a big public party had taken place in the same place: as people arrived around the “DJ”, the sea, inexorably drawn by the Moon, rose up the beach. The phenomenon of compression between the granite wall and the rising water was not lacking.

Faced with such scenes in a rather family and quiet place, I do not dare to imagine the unfolding of the many official or impromptu events that must have taken place in the large seaside resorts of southwestern France or the Côte d’ Azur. The News, however, are sobering: Catalonia, on our doorstep, has resumed confinement and Spain is considering closing its borders again, no matter what the EU spirit. In the United States, China, India and in the UK, the Corona continues. Russia, according to the New York Times [1]“Russia said to try theft of reasearch on vaccine”, The New York Times – International Edition, July 18-19, 2020 considers all possible solutions, including industrial espionage, in order to steal biological information related to a possible vaccine.

When the French government ordered the containment measures, I found the process exaggerated: now, regarding many fellow citizens’ beheaviour, I find that a lot of them are irresponsible. Even if it is true that in essence, the human species is social, that is to say made to be in relation with the others (even if it means hitting its neighbor!), and that the whole of our organizations, including those dedicated to leisure, are designed on the model of grouping and mass production, we must stop the progression of the crowned virus. Indeed, as a reminder, if the Covid 19 causes human losses, its economic and social consequences are likely to be appalling.

On the financial level, the French State, already indebted to more than twice its annual income (2 trillion euros in outstanding for one trillion contributions per year), not to mention its long-term commitments, will have increased its debt by a quarter, only for the year 2020. If we take the comparison, a little biased, with the GDP [2]Indeed, the Gross Domestic Product corresponds to all the wealth produced on French territory in a given period, generally a calendar year. But the State, despite the fact that the latter controls 56% of GDP (pre-covid), does not have all of this wealth. Public debt/GDP ratio does not correspond to accounting reality. The relevance is to compare public debt with the income of all French public structures., in a single year, the French will have gone from a debt equivalent to 100% of their GDP up to 125%! Already, on medias like BFM, economists openly affirm that the public deficit is not serious or that the debt can be perpetual. These expressions simply prepare public opinion to accept the fact that we will never be able (or willing?) to reimburse our outstanding debts accumulated since 1981. In other words, that the French State’s default of payment is in preparation. But promised, the latter will use more poetic and/or more complex terms to designate (or hide?) this reality.

Socially, massive layoffs are expected at the same time as the arrival of 700,000 young graduates on the French job market, in the coming September (Ouest France; l’Etudiant). If the second wave in France turns out to be as strong as the first one, school new year, everyone feel it more or less, may be complicated, to use a buzzword in the media. The current summer is perhaps seen as a breath of fresh air between two confinements, like the Phoney War experienced between late 1939 and early 1940 in Europe: the second fight is inevitable but just a little delayed.

But we can always hope for a miracle, provided, however, that everyone does one’s part to prevent the pandemic. Otherwise, September 2020 may well catch fire and our economy will turn twilight.