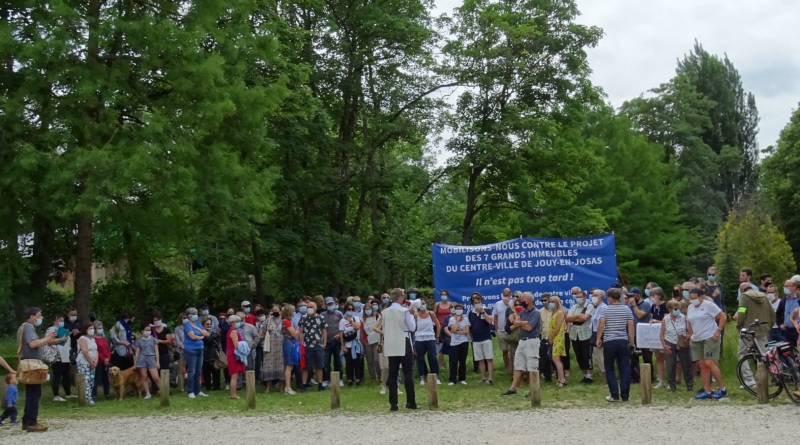 The right to protest can also be applied to the local level. The proof: in the small district of Jouy-en-Josas, 8400 inhabitants (including 2000 students at HEC business school), a group of several associations, for the protection of the Bièvre valley and of around 120 inhabitants, met on Saturday, 12th June in a friendly and festive atmosphere for manifesting their disapproval towards the future project of the property developer, Franco-Suisse. This demonstration probably is a first, apart from the events on the HEC campus.

The constructions for the Villa Galia project should start within a few weeks, at least theoretically. On the ground, the associations Jouy-en-Cœur (Jouy-in-Heart), the Amis de la vallée de la Bièvre (AVB) (Friends of the Bièvre valley), Un avenir pour Jouy (UAPJ) (A future for Jouy), the Collectif Agissons pour Jouy-en-Josas (Group: Let’s Act for Jouy-en-Josas) and Patrimoine-Environnement (Environmental heritage) had issued five appeals against Franco-Suisse.

In a nutshell, the problem rests on three pillars: the first is scientific one, the second political and the third logistics.

The risks: Flood runoff and pollution

The first basis of complaints focusses on the risks of flooding. Alain Vicaud, a retired engineer specialised over flood issues for the power plants, warned that the runoff risk was not taken into account/incorporated in the building permit. He also informed the protesters that the aquifer, a 4.50 m thick vast sponge, keeps the water in case of rain, at the ground level on the western part of the land to be constructed and at 50 cm from the surface in eastern part of the terrain. Yet for construction of underground parking lots, you have to dig/digging is necessary (as said by Mr. Jaques de la Palice)! And to burn a hole in a land filled with water is a challenge!

Undoubtedly/More precisely, we know how to build on flood-prone terrains but, the cost of this construction is higher. Construction of four-storeyed buildings on this type of soil could also cause the railway line, located right next to it to collapse through a compensation phenomenon (the same is observed at the scale of a continent: Isostasy [1]It is a phenomenon in which the different layers of the earth’s crust remain in relative equilibrium due to the viscosity of the medium (mantel) on which they all rest (cf.: P. George, F. Verger, A Dictionary Of Geography, Paris, PUF, 2004). For example, when a glacier forms on a mountain, the added mass will cause, by compensation, an elevation of the territory located on its side. This is a system of balance. For compensating this (all-out) force while protecting the C line of the regional train (RER or Réseau Express Regional/Regional Express Railways), it would be necessary to bury a wall several metres deep running along the entire area, which would not be possible without additional costs.

To this we can cite the problem of sub-soil pollution as well: antimony (a metal), asbestos, hydrocarbons and sulphur. This terrain served as the local logistics platform for the former courier service of the French National Railways (the SERNAM) and as the industrial site for a chemical factory. Who shall take the charge both in terms of technology and finance, of the decontamination of this site?

Political Issue: What function for this city centre?

The second point is political: what to do of the city centre of Jouy-en-Josas? Retransforming it into an urban zone with seven buildings, of which many have 3 floors (ground floor + 3 floors = 4 storeys), in a small city accustomed to modest buildings and moreover to green zones which as for them are vast! Several Jovaciens have expressed their desire to continue living in a city-park.

The townhall argues its choice over the fact that this terrain was sold for 5.8 million euros and discontinuing this urban project would be very expensive. The associations retorted that the business quarter known as the Petit Robinson in which the rehabilitation and conversion (this is to ensure that the buildings are used for housing matters and not for work purposes) operations had begun already, could perfectly perform the trick (so as to say) while avoiding the risks of flooding. Some could also argue on the social housing quotas: minimum 25%. But there too, the town has exceeded the threshold, thanks to the student accomodations of the HEC.

Finally, the third pillar concerns the logistics: what about the organization/arrangement of the emergency services in an event of fire? Indeed, the fire station is located at the entrance of Vélizy, in the north of Jouy. The firemen should go down the so-called “Dead Man’s Coast” road which leads to a level crossing. Today, without counting the new apartments, this route is saturated by traffic jams day and night. Moreover, in case of a flood, a possibility for the Prefect to order the evacuation of the buildings must be foreseen, which would be damaging both for the market value of these housings and for their possibility of being normally insured.

Contrib’City contacted several sales representatives and other employees of the Franco-Suisse, both at Jouy-en-Josas and at the head office in Anthony: the welcome was cordial but none could provide the information about how their employer plans to mitigate the risks of run off. By runoff, we mean the flow of water on the northern and southern slopes of the valley which surround the Bièvre. A mail addressed to the CEO Damien Rolloy last Wednesday, went unanswered. An opportunity of meeting him also was missed, where the developer could have given his point of view not just in the face of the growing demand for housing in Ile-de-France but also in the face of the risk of flooding, in a context of global warming (For example, the current month of June is very hot (33° C expected in Paris for 16 June) and that of last year have broken all heat records in France, since weather measurements were made in this country (source: France Info, June 14, 2021)).

This local example of confrontation as for the utilisation of the territories subjected to very strong opposing tensions once again questions the French-style centralization. A point to remember, the Parisian region – a little more than 4000 km2 (more than 1/4th of the Ile de France) – today controls a third of the French GDP (Gross domestic product that is to say the entire wealth produced within the French territory including its overseas territories), against the quarter it controlled 10 years previously and accommodated one in every five French citizens! The result is a pressure on the land that attracts as many public as private agents. A number? When a square metre of arable land (Ile-de-France is popular for its agronomic qualities) becomes built its sale values is perhaps multiplied by 200! Something to attract attention indeed.

Jean-Louis du Fou, president of the Amis de la vallée de la Bièvre (Friends of the Bièvre valley association) introduced the protest while explaining that it wasn’t too late to combat against the building project and that 5 appeals have been filed. Video : BdF, le 12th June 2021, Oberkamp Parking , Jouy-en-Josas.

Jean-Louis du Fou, president of the Amis de la vallée de la Bièvre (Friends of the Bièvre valley association) posed the question of logistics management in case of fire in future apartments? Indeed, the site is situated on the other side of the railway (compared to the road that leads to the fire station). The obstacles are thus varied: level crossings, traffic and narrow roads. In case of flooding, evacuation would be even more difficult. Video: BdF, 12 June 2021, parking Oberkampf, Jouy-en-Josas.

Jean explained the problem with the retention basins. The latter are exclusively effective for the medium floods. And not for the exceptional ones such as the 100-year floods. But with the global warming, one can expect more frequent and powerful episodes of storms. Video: BdF, 12 June 2021, parking Oberkampf, Jouy-en-Josas.

Two Jovaciennes (native females of Jouy-en-Josas) expressed their sensitivity towards the landscape. The densification according to them, pushes the families a little further from Paris. The town hall advanced the need to fill the nurseries and the classes. However, a supplementary creche is already in the works that shows demand. Moreover, wouldn’t the primary schools in Jouy-en-Josas not be confronted by the attractiveness of the colleges of Versailles and of Buc (Franco-German High Schools)? Video: BdF, 12 June 2021, parking Oberkampf, Jouy-en-Josas.

A resident of the town of Bièvre showed her determination to protect the valley. Video: BdF, 12 June 2021, Parking Oberkampf, Jouy-en-Josas.

(Cover Photo: photo of the demonstration in front of the building of Franco-Suisse. Photo BdF: Parking Oberkampf, 12 June 2021)