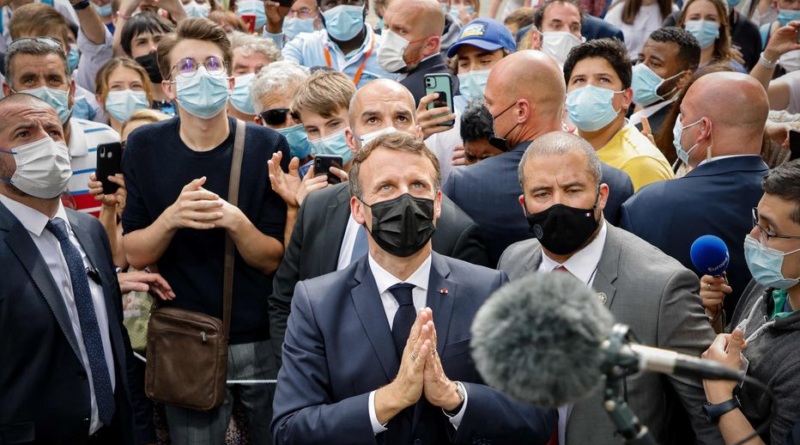 One day. It would just take a day for the current French President Emmanuel Macron to massacre the two principles which were previously long entrenched in the values of the Republic.

It must be said that since the LREM came to power, rarely have the weeks not been marked/stamped by the seal of indignity or an unreal incarnation of power.

Yet in the past 48 hours, Macron has attempted a freewheeling drive showing that, after effectively undermining the presidential office for four years, there still remains something to ridicule about himself and what he represents.

This is the first time that an incumbent president has visited a place of such religious symbolism in the last 80 years. In other words, it is the first time since the war that a President is also unaware of the idea of separation of the Church and the State of 1905.

Even 16th July was not left to luck/fate, in order to emerge victorious from this disguised political rally. In fact, the 16th of July 1858 represents the last apparition of the Virgin Mary in Lourdes.

On his electoral pilgrimage or something related/akin to that, Macron perhaps thought so to see the miracle.

It is the debacle that he will have found. In consonance with 1941, the date on which the sanctuary was last walked on by…Phillippe Pétain.

It was just as much a debacle as when his security forces violently pounced on a citizen who found it scandalous that a President should go to such Church as a proclaimed atheist and as a guardian of the 1905 law. But freedom of expression is only possible more than 5 metres away from the President, in the interior circle there was place only for the devotion and admiration, or the beating.

It was thus only in Lourdes that Macron learnt about the indictment of his minister of Justice Eric Dupond-Moretti for ‘illegal conflicts of interests’ (a punishable offence under French penal code). Macron had not just slaughtered a republican principle but also in his own words, as he admits indirectly, a principle which is not worth much.

An exhumed video of 3 March 2017 showed that (candidate) Macron (until he got elected) facing Pujadas explained: “a minister must quit the government when he is indicted”. However, in Lourdes Macron hastened to give his unwavering support to the Keeper of the Seals (a title held by the Minister of Justice) in the untenable position which could be a “centrepiece of his 2022 campaign” (France Info).

After defiling himself, it is the Republic that he (has) tarnished/sullied with his embarrassing/awkward ignorance, with these words: “justice is an authority, not a power, I will not let justice become a power”. The good old anti-Justice tirade so dear to the National Rally. You were warned that Macron was coasting/running wild.

When you see what they are learning at ENA, you realize that its abolition will ultimately make little difference to the state of our country. Could a final year student explain to the President that justice is on one hand already a power and on the other hand what is the name of a leader who openly makes hostile remarks to the justice of his country?

This obsession of power seems to lead him to discourses and actions which aren’t subject to any law, any control, any reflection and any political retreat necessary for the incarnation of such a function.

Macron seems to be willing to do anything to get himself re-elected even if it means governing like a mountebank. Nine months remain from the first round of elections in April 2022.

Can he sink the country to level lower than the current low?