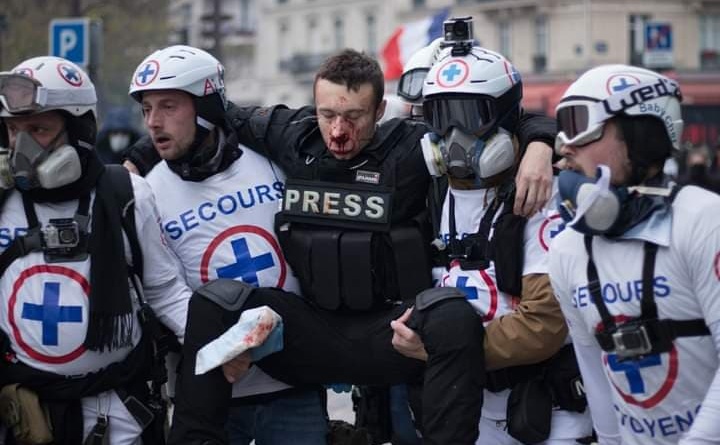 Darmanin[1]French Ministry of Interior when this article was published. is about to succeed in the feat of prohibiting the filming of the police. The latter broadly approved this bill. However, no one is going to come out a winner from the idea of ​​”global security”. In this, Gérald Darmanin is far from being the providential man for the police forces.

The cancer of society is the failure to respect authority, said Gerald Darmanin on November 14th in Le Parisien daily. But not abuse of power, privileges, preferential treatment, impunity, authoritarian power, incompetence, state lies, corruption, extreme concentration of power in one one man; neither conflicts of interest nor tax evasion. Not the lepenisation of the Macronist discourse nor the increase in domestic violence; not election promises that are not kept thereafter; not political betrayal and even less usurpation.

Since his appointment as France’s first cop, Darmanin has tried to embody the function. Like all morally fragile men who find themselves in positions of power, the slide towards authoritarian drift can be observed. As if to embody the function and be credible, it was necessary to be authoritarian. That says a lot about the individual’s idea of ​​his own legitimacy in the post. Macronie is particularly keen in offering to these tormented individuals those extreme sensitivity positions. Eric Dupond-Moretti [Justice Minister] and his personal vengeance against the magistrates have shown on the one hand the truth of this assertion but also that the Press is indeed one of the last counter-power capable of channeling the blows of narcissistic and neurotic follies of these individuals.

Darmanin began his appointment with an impressive zeal, which consisted in filing a complaint against anyone who could express ambiguities about the police. Governance through fear is the choice made by this former public finance controller. Today, in the midst of a health crisis, he decides to step up a gear. To hide the illegitimate violence of certain police officers, whose videos abound on the web and which have even triggered debates and questions from journalists in the face of Edouard Philippe, Darmanin is pushing a bill of total danger. To make things that annoy disappear, we must prohibit filming things that annoy. Who can claim to be democratic by acting in such a way? with such logic? Making disappear is an undemocratic and deeply dangerous technique for anyone who intends to adopt the French slogan, which has admittedly long been misguided. Thanks to Darmanin and La République en marche (LREM) Party, the global security bill will eliminate the Cédrid Chouviat, the Benalla, the police violence on Gilets Jaunes, the Théo and Genevieve Legay cases. The violence will be forgotten, impossible to prove, and acts of impunity will further widen the gap between the Police and their population. How if it was needed.

The risk of radicalization of the poles

The global security law is indeed an authoritarian drift of power. Despite attempts by LREM deputies to practice camouflage, repeating a score learned by heart that there will be no change, their words have long been inaudible. As proof, article 24 of the draft Act proposes to punish of one year in prison and a fine of 45,000 euros for dissemination “by any means, of the image of the face or any other element of identification – to the exception of the registration number, known as “RIO” – of a police officer or a gendarme in intervention, when the purpose of this distribution is to affect his physical or mental integrity ”.

How (and who?) are we going to decide that one video rather than another will aim to infringe or not on physical or mental integrity? Above all, the psychic issue is almost ridiculous. Filming a police officer in the act of abusing a demonstrator does not systematically lead to reflection on the potential future psychological damage to the police officer (although it could exist!).

The UN High Commissioner for Human Rights has expressed concerns about a major violation of human rights and fundamental freedoms in France. So is this where Macron and his clique are at to silence potential future demonstrations? To flirt with the law, to administer fear as well as justice for the purposes of dissuading the masses, is to report its failure on all other fronts: the dialogue (and not the monologue), the social project (soiled by lies and unfulfilled electoral promises as the great cause of equality between men and women), the fall in confidence in failing institutions or even in a Parliament which is only a recording box for the wishes of the President.

Losing sight of one’s identity at this point in this authoritarianism is worrisome and will only divide what can still be divided and further increase the fear that the Police inspire, and it is not for improving the problem either. If the police in their majority approve this bill, they suffer on the other hand from a public image that need to improve. This vicious circle will not be bridged by this law, which will still inspire fear over fear. On the contrary, the Police should not confuse fear and respect. In fact, no one seems to be a winner in this law, except the politician who, always a little more, hides behind his Police Force whom he despises and whom he no longer hesitates to demonize in order to survive.

Authoritarianism is an admission of failure, a fear of the People and a lack of confidence in its own place, its own legitimacy. In this, authoritarianism poses a double question of trust. In both cases, there is a crisis. Either way, the Police won’t come out greater.

Coverphoto: Le Mur Jaune (2019). With the “Global Security” bill, journalists could be sued for having done information work necessary for any democratic foundation.

On Thursday November 26, 2020, eight days after the publication of this article, the Loopsider site revealed a beating by three policemen, in Paris on 21st November, of a music producer: Michel.