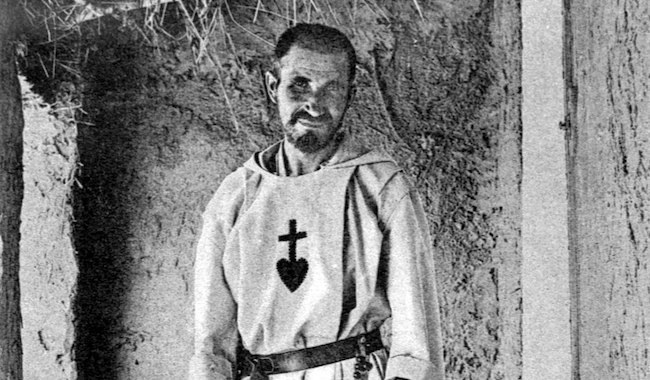 Father Charles de Foucauld was canonized yesterday, along with other people, notably Lazare Devasahayam Pillai, an Indian lay martyre, after the long period of the Covid epidemic.

Once again, what I love about Charles is his ability to follow his intuition, his inner motion.

Whether we believe in God or not, the explorer encourages each of us to discover who we are, the life we carry and invites us to offer it to others. Thus, we enter into a real relationship, authentic and deep, but also, often, painful.

The relationship with the other reveals our own flaws, our own chasms, where life and death confront each other, in a daily fight where the second tries to hide the first, through lies and fear. A fight whose ultimate stake is perhaps in the revelation of oneself: who am I? Do I want to go to the end of my personality and in the momentum of what I bear, despite the risks of judgment, despite the potential upheavals of this inner journey, of this outing into the universe of otherone?

Do I agree to show my neighbor the frailties of my being and, in union, offer him a relationship of truth? Do I consent to undress myself to let my fortresses fall?

A relationship and a bond of union with one’s child, a spouse, a relative or a friend makes it possible to enrich oneself with the gifts that the other carries. Am I ready, despite death, to offer my life to my neighbour?

In the solitude of Asseckrem or among people in the crossroads town of Tamanrasset[1]Tamanrasset, an oasis-city located more than 1,500 km from Algiers as the crow flies, in southern Algeria, had 120,000 inhabitants in 2012., Charles showed an example of a life of relationship. The priest, immersed in the immensity of the Sahara, in a territory classified as hostile by his fellow geographers, on the extreme limits of the former French empire, had chosen and lived this freedom. To the end of his path, towards the infinite horizon where a sun dances that never goes out and guides us deep in our hearts.

(Cover photo: Charles de Foucauld in his hermitage. He spent there, at most, about five months.)